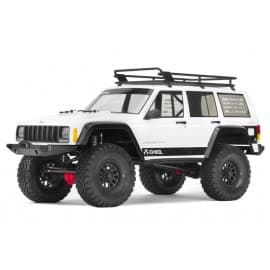 2005 marked the birth of the Axial brand, and shortly after, thoughts about the first SCX10 began, with development wrapping up in 2008. The SCX10 was introduced to the world as a builders kit, paving the way, or better yet, raising the bar for a new generation of scale trail enthusiasts. Previously, hobbyists had to “scratch build” a rig which presented a lot of technical hurdles to overcome. The SCX10 kit gave these “artists” time to focus their attention on other things like personalization and visual customization by removing the issues scratch-built scale rigs presented. And, it wasn’t just as a great kit to build, it was also a very capable driving machine, making it the de facto scale rig the world over. The SCX10 chassis platform provided all the technical attributes as well as scale looks with its signature all-metal twin c-channel frame, solid performing transmission and axles that provided enough realism with capabilities to match.

With the SCX10 II, we’ve kept essence of the SCX10 there with all-metal twin c-channel frame rails, but that’s only 2% of the 98% of a completely new design. Scale AR44 high pinion axles, a chassis mounted servo (CMS), re-designed transmission, front mounted battery tray, all aluminum suspension links, and a properly designed suspension for nearly zero bump steer. These are just a few of the features built into the all new SCX10 II.

While developing the next iteration of axles such as the AR60, we started thinking about what kind of axle would be more suited for the future of the SCX10. Our design of a new axle needed to feature three key points. First, we wanted the axle housing to visually quench the thirst of scale enthusiasts. Second, we needed to create a gear set with the technical attributes to overcome the torque twist that is often associated with smaller gear sets. Third, the axle itself needed to be durable.

After seven years of utilizing the original AX10 axle and two years of development, Axial is proud to introduce the industry's first high pinion gear set in our newly developed AR44 axle! The next chapter of the Axial SCX10 begins with true technological engineering and scale realism!