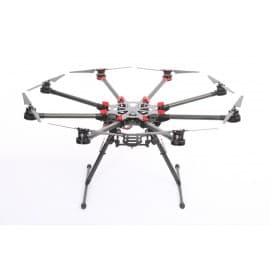 Featuring a removable upper center board for easier installation of flight electronics as well as a redesigned power distribution system, the Spreading Wings S1000+ Professional Octocopter from DJI continues the legacy of the original S1000. The S1000+ is a collapsible, eight-propeller RC helicopter designed to carry a DSLR or similar-sized camera. With a 24-pound maximum takeoff weight, it is intended to serve as a camera platform, allowing professional videographers and photographers to add dynamic aerial shots to their productions. It is designed to work with either the A2 or WooKong-M flight control systems, which are available separately.

For stabilizing and moving a camera in flight, the S1000 is compatible with any of the Zenmuse Z15 series gimbals. The airframe features a dampened gimbal mounting bracket with a low mounting position. Additionally, the landing gear can be raised, allowing an unobstructed 360° of visibility.

The S1000 is designed to power 6S lithium-polymer batteries. It will support capacities between 10,000 and 20,000mAh, and requires a discharge rate of at least 15C. With a 15,000mAh battery and a take-off weight of 21 pounds, it is estimated to fly approximately 15 minutes.