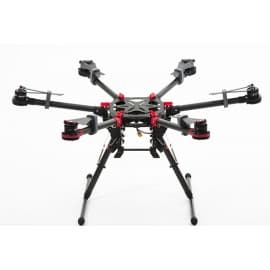 Supporting a total takeoff weight of 18 pounds, the Spreading Wings S900 Hexacopterfrom DJI is optimized for installing a gimbal such as the Zenmuse Z15 enabling capture of aerial videos and photos. It features carbon fiber frame arms to cut down on weight, which fold down for storage and transport. Used with a 6S 12000mAh battery, available separately, the S900 can fly for up to 18 minutes fully laden.

This version of the S900 does not have a flight control system included. It is designed to work with both the A2 and WooKong-M systems, depending on user preference and the types of radios to be used. The Wookong-M is more widely compatible, while the A2 is for Futaba FASST series and DJI DESST series transmitters.

The S900 is not a ready-to-fly (RTF) aircraft. It does require some assembly and, in addition to the flight controller, a transmitter (hand-held radio controller) and batteries are also required. For power, it uses LiPo flight batteries in 6S configuration, a 10,000 to 15,000 mAh capacity, and requires a discharge rate of at least 15C.

Folding Arms
The prop arms are made of carbon fiber, which is used because of its high strength-to-weight ratio. For transport and storage, the arms fold down while the propellers split down the middle further reducing its size

Retractable Landing Gear
The landing gear raise above the level of the gimbal during flight to give you a full 360° of shooting. In addition, the gimbal bracket is separated from the main airframe by specifically designed dampers. This significantly reduces high-frequency vibrations to help make your shots clearer and sharper

Removable Upper Center Board
The upper center board can be removed, allowing access to the flight controller and IMU, and giving you a convenient way to setup the power distribution system. This design also simplifies installation of the main controller, iOSD, Lightbridge, or any other accessories that interface with the flight computer

Greater Power
A 40A electronic speed controller (ESC) is built in to each arm. Combined with its 4114 motors, high performance 1552 folding propellers, and V-type mixer design, the S900 has a maximum thrust of 5.5 lb. The motor adopts a single wire stator design, offering improved heat dissipation, better performance, and a more reliable system than earlier models

Angled Arm Design
Each arm is designed with an 8° inversion and a 3° inclination, making the aircraft more stable when rolling and pitching, yet more flexible when rotating